“The chief cupbearer, however, did not remember Joseph, he forgot him.” Genesis (40:23) 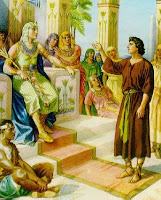 After Joseph’s brothers sold him into slavery, he was put into prison because of Potiphar’s lustful and lying wife (Genesis 37:28, 39:20). Sometime later, the Lord enabled him to interpret the dreams of Pharaoh’s chief cup bearer and chief baker (Genesis 40:12-19). God had given Joseph a favorable interpretation of the cup bearer’s dream, so Joseph implored him, “But when all goes well with you, remember me and show me kindness; mention me to Pharaoh and get me out of this prison. For I was forcibly carried off from the land of the Hebrews, and even here I have done nothing to deserve being put in the dungeon” (Genesis 40:14-15). Joseph thought that his time to get out of prison had finally come but, “The chief cup bearer . . . did not remember Joseph, he forgot him” (Genesis 40:23).

Forgotten. Like Joseph, you have done nothing to warrant the dungeon of the situation you are in, but things seem to be going from bad to worse. Moreover, you’ve been in the dungeon much longer than you thought you would be or could stand to be. You’ve called on God, begging him to rescue you, but in your life, God seems to be playing the part of the cupbearer who forgot Joseph.

According to Psam 37:23, “The steps of a righteous man are ordered by the Lord, and he delights in his way.” Although you feel trapped, imprisoned, God has not let you out of his sight. He is with you. He has ordered each one of your steps, just like he did with Joseph. In the midst of his affliction, Joseph could not see that he would (1) be sold into slavery so that he would end up in Potiphar’s household (2) be falsely accused by Potiphar’s wife and sent to prison so that (3) he could meet Pharaoh’s cupbearer and interpret his dream, (4) be forgotten by the cupbearer until the exact moment that Pharaoh needed someone to interpret his dream, which led to (5) Joseph becoming the second in command in Egypt, which enabled him to (6) deliver the Egyptians, his family, and others from the famine.

God’s thoughts are not our thoughts neither are his ways our ways (Isaiah 55:8). Be assured child of God, that although you cannot discern a purpose, God may be using this dungeon of difficulty. He’ll set you free in due time. In the meantime, he will give us the power to persevere, moment by moment if need be.

Clarification. The point here, is that it was no accident that Joseph was in prison for the time he was in prison. We can be imprisoned by our situations and circumstances and be smack dab in the middle of God’s will, right where he wants us. That is difficult to swallow, but true. However, I must give one disclaimer. If you are in any kind of abusive situation, please do not use this meditation as a reason to stay put. Seek help and get out! Fast, if you can! Seek help from a trusted person, or call a hotline, even the police.