Jesus Still Controversial Even on the Heels of Death 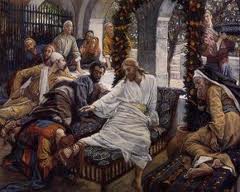 A Meditation on Mark 14:1-31.
The passage opens with Jesus at the home of Simon the Leper. Who is Simon the Leper? Was he a leper Jesus had healed that couldn’t shed the name leper because that is how people knew him? Or was he full of leprosy, but maybe rich enough to get a societal pass because of his money? We don’t know. But apparently Mark’s audience knew of Simon the Leper. Simon the Leper had some sort of reputation, enough of a reputation to be specifically identified. So, we find Jesus reclining in his home. That is, Jesus is hanging out with a leper right before his death. And of course, his disciples were too…even if before following Jesus they never would’ve of dreamed of it. Now, they don’t think twice about hanging out with a leper, at least it’s not recorded that they do.

Most of us have either heard of or read this account before. And we don’t think twice about it either. But I want us to. Scripture always beckons us to think once, twice, a thousand times, because it always has something to say to us. So let’s pause and think of what it might have meant for Jesus to hang out at the home of Simon the Leper.

I tried to put myself in the position of the religious people present at Simon’s home. And I couldn’t. It seems like I’ve grown used to Jesus hanging out with tax collectors and sinners. I’ve read it and heard it a bunch of times and so that seems quite characteristic of Jesus. Nothing surprising or disturbing there. And today, at least in the United States, there is no stigma associated with leprosy. Frankly, we don’t see the disease or its effects around in these parts, although when I was in India I did. Still, really, there is no stigma associated with it in our minds.

To understand how disturbing Jesus’ actions were to the people of his time, I started thinking about what I might find jolting or disturbing. And I’ll tell you. I’d be very shocked and quite a bit dismayed if I found out Jesus was hanging out at Hugh Heffner’s mansion. You know, Hugh Heffner, of playboy fame. That wouldn’t sit well with me. I’d probably call Jesus on it. I’d be like, “Jesus, what are you doing? The man is disgusting.” Maybe you would find something different disturbing. Jesus hanging out with greedy unethical CEOs. Or maybe Jesus hanging with either ultra-conservative people  you deem legalistic Pharisees or those you believe to be too liberal to be Christian. If we think about it those terms, in terms that would be deeply offensive to us, we can start to understand why the reactions of many of the religious people in Jesus’ day were those of shock and dismay and even disgust.

What are some other things that even Jesus’ disciples found deeply offensive at Simon the Leper’s home? Well, a woman, who the apostle John tells us is Mary of Bethany, anoints Jesus’ head with oil. Scripture says her sacrifice was more than a year’s worth of wages. So back to our day. In 2005, the overall median personal income for those in the U.S. over the age 18 was $25,149. If we just use that as an example, to get us to see the expense of her anointing actions, we’d see it is like she broke a $25,000 bottle of perfume and dumped it over Jesus’ head. No wonder some of those present were like, “What on earth is she doing? She could’ve sold that and given the money to the poor.” Judas said it.

Couldn’t some of us see ourselves saying that? I sure could. Wouldn’t a year’s worth of any one of our incomes go far in helping the poor surrounding us? You bet. One of the commentaries I read remarked that this woman’s “spiritual insight and generosity are contrasted with the spiritual blindness of the high priests and scribes” and even Judas’. And I think it is contrasted with our own too.

If we look further at this incident that occurred at Simon the Leper’s house, we’ll find something perhaps more disturbing to some of us and to those present at the time: it was a woman who had such spiritual insight. A woman of all things! She knew Jesus was the Messiah. And she acknowledged it by anointing him—an anointing Jesus tells us was also symbolic of his anointing before burial. My friends, every king of Judah was anointed by a prophet before he was crowned king. But here Jesus was anointed by a woman, not a prophet.

But what does Jesus say? “Leave her alone . . . Why are you bothering her? She has done a beautiful thing to me. The poor you will always have with you, and you can help them any time you want. But you will not always have me. She did what she could. She poured perfume on my body beforehand to prepare for my burial. I tell you the truth, wherever the gospel is preached throughout the world, what she has done will also be told, in memory of her.”

Jesus wasn’t bothered by her sacrifice to him. He called it beautiful, so beautiful that he wanted it etched in the memory of the Church, and thus the gospel writers recorded it for our benefit this day. It seems that Jesus’ position toward women then and even now is disturbing to those in religious circles.

Well after that, we leave Simon the Leper’s house and we find ourselves privy to a secret meeting between Judas and the chief priests even if it’s just for a historical second. Then we are quickly whisked away to the upper room. Apparently, Judas had had enough of Jesus. Jesus it turns out, didn’t conduct himself in a manner fit for a king. Jesus didn’t live up to Judas’ ideals or his perceptions and expectations of the Messiah or his perception of reality. So he gives up on Jesus, betraying him on the cusp of the single most tragically triumphant moment in all of time. I don’t know about you, but the more I think about it, Judas’ betrayal is disturbing to me. It’s disturbing that someone so close to Jesus, someone who had witnessed his miracles and character, would commit the most treacherous act in history.

Again Mark quickly whisks away to the Mount of Olives. In the opening scene, in this snap shot, Jesus tells his disciples that they will all fall away. Peter couldn’t believe it. Peter wouldn’t believe it. Maybe he thought, “Judas would betray you, but not me. Not me Jesus.” And he said as much. But Jesus told him that he too would betray him in a matter of hours.

Let us not think that we get off the hook either. We too have and will betray Jesus when he doesn’t fit our expectations. Some of us betray him through our behavior and others of us betray him by holding onto ideas he wants us to discard and not picking up others ones he wants us to have. Indeed, many of us would rather hold on to our idea of Jesus than Jesus himself. Put another way, sometimes we are in love with our ideas of Jesus, but not Jesus himself.

To be honest …we are the religious people of the day. Who did Jesus jostle? Who did he disturb? The religious people of the day. Who else did he disturb, jar, shock, dismay…(you pick the word)? His true disciples. If Jesus doesn’t shock us, if Jesus doesn’t dismay us…if he doesn’t have us with our backs up against the wall every now and then …enough that we have to say uncle and change… if we are not disturbed or dismayed, yea even disgusted…I wonder if we’ve been really hanging around Jesus.