Please Support The Dream Act (In The USA)

Hello friends. The Dream Act is very important. It passed the house and all of sudden came up for a vote in the senate. There will be a senate vote tomorrow, Saturday,  12-18-2010. I ask that U.S. citizens read this, consider this, and hopefully act! 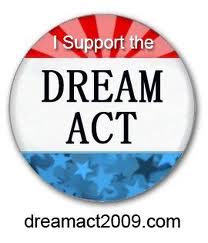 Carlos Amador, 25, and Sofia Campos, 20, grew up thinking they could be part of the great American dream that promises hard work and perseverance leads to prosperity and success.

The two bright, talented young people are waking up to the reality that despite excelling in academics and devoting a large portion of their time to community service, their dreams will probably not come true.

Amador was born in Mexico City and his parents brought him to the U.S. when he was 14. Campos, born in Lima, Peru, arrived in the U.S. when she was 6. Both are good, hard-working students. Both are also illegal immigrants.

Amador is in graduate school at the University of California, Los Angeles, pursuing a master’s degree in social work. Campos is in her fourth year at UCLA and wants to go to graduate school for a dual program in law and public health. But when they graduate, their immigration status will likely prevent them from finding work in the United States.

They are two of more than 800,000 young people who could benefit from passage of the Development, Relief and Education for Alien Minors Act or DREAM Act.

The legislation would allow illegal immigrants who entered the U.S. as children — 15 and under — and have lived in the country for five years to apply to the Homeland Security Department for conditional legal status after graduating from high school.

Their legal status would make them eligible for in-state college tuition rates and some forms of federal financial aid. If they attend college or participate in military service for at least two years, they would qualify for legal residency and be on the path to citizenship.

Supporters say the act will encourage young people to join the military and attend college.

Praying for a vote

As Congress reconvenes for the lame-duck session, DREAM Act students are rallying again in hopes that the bill will come up for a vote and pass.

Earlier this year, the Senate voted 56-43 against a defense bill that included the DREAM act as an amendment. The act has been introduced in Congress in various forms since 2003. United Methodist Sen. Richard Lugar, R-Indiana, and Sen. Dick Durbin, D-Illinois, introduced the DREAM Act in 2009. This is the third Congress in which Lugar and Durbin have introduced the legislation.

Opponents to the act say it would send a message to parents that violating immigration laws could eventually allow citizenship and access to taxpayer-funded financial benefits for their children.

”The DREAM Act is a nightmare for the American people. It is an assault on law-abiding, taxpaying American citizens and legal immigrants,” said Rep. Lamar Smith, R-San Antonio, the ranking Republican on the House Judiciary Committee.

Sen. Dianne Feinstein, D-California, who has signed on as a co-sponsor of the DREAM Act, said the act is an incentive for bright and motivated students to become responsible, valuable members of society.

“Every year undocumented children graduate from our nation’s high schools or receive the equivalent of a secondary degree. From there, they can take one of two paths: They can look at the hopelessness of their situation and get involved in crime, even join street gangs; or they can continue their education, find a good job and give back something to the United States.”

“Many of these young people make the shocking discovery that they are not American citizens when they attempt to get a driver’s license. When they realize they have no country, no future, no hope, this sends many of them into the depths of depression.” –Lori Stafford.United Methodist support

Amador and Campos are two of the “dreamers” Jeanne Roe Smith works with in [email protected], a student organization made up of DREAM supporters. Smith is United Methodist campus minister at the Wesley Foundation at UCLA.

“Their dream is to create legal pathways to citizenship by demonstrating their academic, moral and emotional fortitude and capacity to be recognized for what some of us already see — as incredible, gifted, committed, compassionate, productive members of our community, campus and world,” she said.

She said the DREAM Act would be a good first step toward correcting “a wayward and broken immigration system.”

Lori Stafford, a member of Lovers Lane United Methodist Church, Dallas, Texas, said it breaks her heart to see the impact being undocumented has on young people.

Many of the students were brought to the U.S. as infants and have grown up as Americans, she said. She wonders why society would invest so many resources into education and then deny an opportunity to work.

“Many of these young people make the shocking discovery that they are not American citizens when they attempt to get a driver’s license,” she said. “When they realize they have no country, no future, no hope, this sends many of them into the depths of depression.”

William Lawrence, dean and professor at Southern Methodist University’s Perkins School of Theology in Dallas, said education is an investment in the next generation of leaders.

In a column published on the religion blog for the Dallas Morning News, Lawrence addressed the moral argument for passage of the act.

“Let’s be clear. The places at publicly funded universities are available on a competitive admission basis, as everyone knows. While some … might try to push the notion that a dependent child of someone who entered the U.S. illegally could occupy a place that might be occupied by somebody else’s child, the reality is that all young applicants will compete for admission to such places — their grades, leadership gifts, extracurricular achievements, scores on standardized tests (SAT or ACT), along with other measuring devices, will determine invitations to enroll.”

In the 2008 Book of Discipline, the denomination’s law book, the church supports comprehensive immigration reform that includes students being able to get an education at an affordable rate.

“We hope that Congress acts quickly to enact this piece of legislation,” said Bill Mefford, director of civil and human rights at the agency. “Passage of the DREAM Act is one important step toward the just and humane reform the broken immigration system needs.”

Amador participated in a hunger strike outside of Sen. Feinstein’s office last July. He said the students felt they needed to put their lives on the line to show how much the dream means to them.

After the bill failed in September, Amador said he is still hopeful it will pass and vows to continue to work for passage by the end of 2010.

“We are upset and saddened that our dreams have not yet become true, but I feel as many other students that the DREAM Act will pass sooner than ever,” he said.

From the National Association of Latino Evangelicals

Call now, and we’ll connect you to a Senator still wavering on the DREAM Act: 866-587-6101. Colleagues, they’re saying the odds are against us right now, but we know better than to let that stop us. Last week, when the DREAM Act came up in the House, we were in the same spot. We didn’t have a clear path to victory. But we made over 70,000 calls to Congress on the day of the vote, and we won by a margin of 20 votes