Who Do You Say I Am? Making A Trade

Here is part of a sermon my husband, Shawn Graves, gave last year (he is not a pastor, but has those gifts). 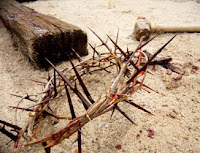 It was Peter who said it.

Peter confessed, and he was blessed. Profoundly.

Jesus wholeheartedly affirmed Peter’s daringly bold and flat-out counter-cultural confession, citing its divine origins. And then Jesus said something like this to him: “Peter, upon you I will build my church.” Or, in Aramaic, the language Jesus spoke: “Kefa, upon kefa I will build my church.” Sure, it’s still Jesus’ church, still Jesus’ kingdom people, and sure, it’s still Jesus who is doing the building, gathering all of the people into the kingdom. But still—still!—it would be through Peter’s leadership and Peter’s authority that this would all be done! He would be Jesus’ Right Hand Man (Right?), and, consequently, at least have a share in Jesus the King’s Glory (Right?). Jesus himself had just said so (didn’t he?).

That was all a few weeks ago.

And then things got weird. Bizarre, really. Unacceptably bizarre.

No. Jesus’ suffering and dying from natural causes would be bad enough. But this was worse: Jesus started talking incessantly about being tortured and even murdered! By the current authorities, the religious establishment, no less!

In short: Jesus started talking a lot about losing. And losing badly.

This kind of talk had to stop now. And it was Peter—the just-days-ago-promised-Right-Hand-Man-share-in-the-Beautiful-Glory-of-the-Conquering-King-Jesus—Peter who would see to it that it stopped.

So Jesus had to be confronted. Or maybe counseled? It wasn’t clear—maybe Jesus had just lost his nerve, his edge, his faith in his Father. Or maybe Jesus simply forgot how winsome he could be (when he wanted to be), how easily he had accumulated thousands of followers (and fed them!), folks who would chase him all over the region.

Whatever the case may be, Jesus had to stop talking this way. Someone had to stand in the way of Jesus’ newfound drive toward suffering, death, and defeat. And Peter—Kefa, the Rock—would be the one to do it.

“Peter took him aside and began to rebuke him. “Never, Lord!” he said. “This shall never happen to you!” (Peter the Rock probably took this to be his first act as Jesus the King’s new Right Hand Man: a bold reprimand/talking to in order to get the ship back on course.)

Just weeks ago, things were great, remarkable, glorious even!

Then things got weird, bizarre, unacceptably bizarre. A reprimand/confrontation seemed in order.

And now—post-reprimand/confrontation—things get positively turned upside down for Peter.

Jesus turned and said to Peter, “Get behind me, Satan! You are a stumbling block to me; you do not have in mind the things of God, but the things of men.”

Jesus had a message for Peter:

Peter, who just weeks ago had divinely-inspired confessions about Jesus coming from his lips, now speaks the very words of Satan.

Peter, who just weeks ago put out of his mind mans’ conceptions of Jesus as mere prophet ready for the Prophet Hall of Fame, now has in mind the things of men.

That message is about that tragic, soul-killing, all-too-ordinary trade we heard about earlier:

Then Jesus said to his disciples, “If anyone would come after me, he must deny himself and take up his cross and follow me. For whoever wants to save his life will lose it, but whoever loses his life for me will find it. What good will it be for a man if he gains the whole world, yet forfeits his soul? Or what can a man give in exchange for his soul?

What indeed? What can a man, woman, teenager, or child give in exchange for his or her soul? As it turns out, just about anything. Peter here may have been looking to trade his soul away for the shot at being the Right-Hand-Man-of-the-Government-Squashing-King-Jesus. Soul for Glory, Sweet Glory. We, on the other hand, trade away our souls so that the “right” people like us, so that we make it in with the “right” crowd, whether it’s classmates or the boss or the woman down the street. We trade away our souls to feed that bitterness and anger we have toward that parent, that ex-friend, that neighbor, that colleague. We trade away our souls to stoke the fire of pride and arrogance, to adopt that stance of superiority over that smelly, lonely kid who sits by himself at lunch, that socially awkward, not-too-bright classmate, that family member or neighbor with “all those problems”. We trade away our souls for just about anything: and that’s the tragic, soul-killing, all-too-ordinary trade that just never seems to make the headlines.

So what are we to do? Stop making any trades at all? Keep our souls to ourselves, so to speak? No, that’s not the way. In fact, that’s not even possible. Trades are inevitable, forced. We all must trade away our souls for something.

Quite simply: An electric chair and a spot behind Jesus.

If anyone would come after me, he must deny himself and take up his cross and follow me.

I know, Jesus didn’t say anything about an electric chair here, but he might as well have. That’s basically what the cross is: one way—a brutal, sickening way—of carrying out the death penalty. And so is the electric chair. (Instead of a cross on the wall behind me, imagine instead an electric chair.) Jesus is telling would-be-followers to strap on their electric chairs, because if you’re going to follow Him, you need to die. You need to get out of the way. You and your plans, goals, visions, wants, rights, life-saving techniques, strategies—all of it needs to go. Scratch that—all of it needs to die.

But there’s a problem. All of those things have a not-so-funny way of coming back to life. And quickly. “I thought I got rid of that bitterness and anger. Why do I feel it again?” “What am I doing feeling smug and arrogant, like I’m better than that kid?” Sure, they can all be killed. But they can all come back to life again. One death is not enough. This is why we read in Luke 9: 23:

Then Jesus said to them all: “If anyone would come after me, he must deny himself and take up his cross daily and follow me.”

So get your electric chair. And get behind Jesus. Not in front of him, face to face with him, confronting him, reprimanding him, as Peter did. That’s not the posture of a follower. Get behind him.

But there’s another problem here: Far from sounding like the right trade for us to make—souls for electric chairs and a spot behind Jesus—this sounds like just another tragic trade, not much different from those soul-killing, all-too-ordinary-trades Jesus warned us about. They all end in death!

Recall what Jesus said to you:

Whoever loses his life for me will find it.

No wonder Jesus could say to Martha while they both grieved the death of their loved one, Lazarus, who was a Jesus follower:

That question was for Martha—but it’s still for us today. Do you believe this? Enough of those tragic, soul-killing trades we so easily make each day. May we all make that truly life-giving trade. May we all trade away our souls today for an electric chair and a spot behind Jesus.