Waiting Around For God

Waiting on God / January 27, 2011 / 2 Comments
Now Moses was tending the flock of Jethro his father-in-law, the priest of Midian, and he led the flock to the far side of the wilderness and came to Horeb, the mountain of God. Exodus 3:1 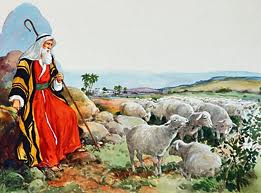 I think of Moses out in the desert wilderness tending sheep. Day in and day out, year after mundane year, for forty years,  he endured the blazing hot sun. His smooth kingly skin turned leathery. Worn out. His best friends–the sheep and the jackals that roamed about. His family–his sole comfort. He had nothing to look forward to. Day after day, as he sat in whatever shade he could find, he most likely reflected on his time in Egypt. Was he crazy to think that he was to deliver the Hebrew people? He must have been. It all ended so badly. So, so, badly. He was only trying to deliver the Hebrew from the oppressive Egyptian overseer when he killed the overseer. That action, instead of inciting the support of the Hebrews ended in him fleeing the wrath of his grandfather Pharaoh. He knew his grandfather and others would see it as rebellion; it meant his certain death should he remain. He had to go.

And while he loved his nomadic wife and family, and his father-in-law Jethro, he couldn’t help but wonder what life might’ve been like in the Egyptian palace. If only he hadn’t followed his hair-brained notion, what he thought to be a calling from God, he might not find himself here in the desert of Sinai. In Egypt, he had promise. Here he was a nobody. A shepherd once a prince. Nothing great, nothing much to report of his desert years. That is until the burning bush.

I often think about what it might’ve been like for Moses during those forty years in the desert. From Moses’ vantage point, his dream of helping the Hebrew people was a lost cause. How could he deliver his people from the Egyptian desert? I am sure the desert caused him to question everything he was so certain of before. If he were to be their deliverer, why’d he spend forty years in the desert?  Surely Yahweh had forgotten him. Or maybe he had never heard from Yahweh in the first place. I am sure Moses thought that his long duration in the desert was proof positive that there was nothing to his notions of being the Hebrew’s deliverer or defender.

When we’re in the desert, waiting around for God, we lose hope because we don’t see any evidence of God’s presence or movement in our lives. We feel like we’re pointlessly tending sheep. And while we might be able to see him in the world or moving in the lives of others, we feel like his goodness and faithfulness are reserved for everyone else but us. It seems that like Moses, we’ve endured forty years of silence. We’ve grown old and worn.

Might I encourage you and myself? God will show up. He will. He always does in a way we can perceive him. Hold on, ask others to hold you if you can’t. That’s what the body of Christ is for. God always shows up. He always comes. Most often unexpectedly–in ways and at a times we can’t forsee. If you are like Moses right now–waiting–waiting–waiting on God–tending sheep–feed on him in places you do see him–even if you’re convinced he has personally abandoned you (yet Hebrews 13:5-6 he says never will he leave us nor forsake us).

Pour out your life for him and for others. And remember Isaiah 64:4, “Since ancient times no one has heard, no ear has perceived, no eye has seen any God besides you, who acts on behalf of those who wait for him.” And also Psalm 84:11, “For the LORD God is a sun and shield; the LORD bestows favor and honor; no good thing does he withhold from those whose walk is blameless.”

Prayers for you brothers and sisters. Remember me too.

2 thoughts on “Waiting Around For God”