Following Jesus / February 14, 2012 / Leave a Comment
Speaking of Jesus, success, and the way of salvation – here is Jeremy Lin’s testimony about living in the wilderness and testing and obscurity. 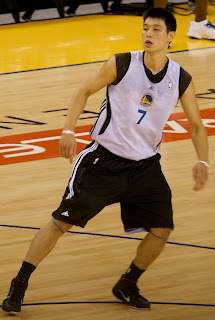 He can no longer stroll anonymously down the streets of New York, but Lin has found peace. He is bombarded with interview requests (even David Letterman got turned down), yet Lin is experiencing a sense of ease he’s never before felt.

His devout Christianity, bred at the Chinese Church in Christ in Mountain View, has been his guide since he was young. But Lin admits these last few months were a test unlike any before.

Sucker punched by the cold business of the NBA — playing for his third team in a year — Lin suffered in silence. Before he was the talk of the sports world, before he was crowned star of the Knicks, Lin was ridden with doubt and anxiety. So he doubled down on his commitment to God.

And without that, he believes, there would be no Lin-sanity.

What the country sees is a Cinderella story, Lin’s meteoric rise from the NBA Development League to unstoppable star. But for Lin, it’s a story of faith, the beautiful struggle he’s now convinced he can win. Most importantly, it’s a story of how he’ll be completely fine if he doesn’t.

“I’m not playing to prove anything to anybody,” Lin said. “That affected my game last year and my joy last year. With all the media attention, all the love from the fans (in the Bay Area), I felt I needed to prove myself. Prove that I’m not a marketing tool, I’m not a ploy to improve attendance. Prove I can play in this league. But I’ve surrendered that to God. I’m not in a battle with what everybody else thinks anymore.”

It took some time, some rough nights, long prayers and countless Bible studies. Lin confided in his pastor, Stephen Chen.

“It was hard. I could make him no promises,” Chen said. “To trust what God is doing is definitely a lesson that Jeremy is continuing to learn and not to trust in his results.”

See the rest of this article, “Exclusive: Jeremy Lin says faith in God triggered ‘Lin-sanity'” by Marcus Thompson II in: