The Need For Friendship.

“Then Jesus went with his disciples to a place called Gethsemane, and he said to them, ‘Sit here while I go over there and pray.’  He took Peter and the two sons of Zebedee along with him, and he began to be sorrowful and troubled. Then he said to them, ‘My soul is overwhelmed with sorrow to the point of death. Stay here and keep watch with me.’  Matthew 26:36-38

I remember reading somewhere about a rabbi who said that someone only really knows us when they know what makes us laugh–what gives us joy.

Don’t you find it interesting that Jesus had “best” friends? His closest friends, the inner circle -people have called it-were Peter, James, and John. He took them with him up, to what is believed to be Mt. Tabor, where he was transfigured. They saw his glory. The verses above remind us that he took them with him to the Garden of Gethsemane where he experienced  hell. They saw him at his worst (if I can put it that way).

But human though they were, they could not stay awake in Gethsemane (at least until the guards came for him). They weren’t really present when Jesus needed them most. They were sleepy and had really no idea what was going on until his time had come. They failed him in Gethsemane. They failed him when they fled capture in the garden and when Peter failed him by denying him. His best friends failed him, they came up short.

But in the end, Jesus doesn’t hold it against them. He knows that they are but flesh–weak and frail–prone to great glory and also to great weakness. What does he do in John 21? He cooks them breakfast on the beach after his resurrection–after all the seemingly disasterous events of the days before and after they had a hard night fishing.

I often think of what a great God we have. What an iconic picture of God’s humility, love, and service to us–breakfast on the beach. The super-power of the universe, invested with all glory, is cooking breakfast for dejected fisherman, his best friends, who left him in his hour of greatest need. 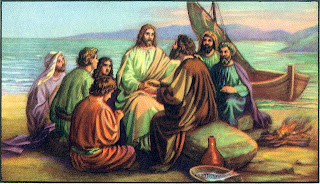 What kind of friend are you? Is there at least one person in your life with which you have a David/Jonathan relationship? The type of relationship Jesus had with Peter, James, and John. Do you pour into a few other people? Although Jesus loves all, truly loves all, he couldn’t spend every minute of his day with thousands of people, nor could he confide in all of them. But he did need confidants. He needed them (in his humanity). Yes God in the flesh needed friends. And he was not only their God, but a good friend to them.

I need friends desperately. Thankfully, I have some soul friends. My husband is one of them. But, I am always open to new friendships, to people who love me for me, to people who  understand me–where no explanation is needed. Friends who are with me on Mt. Tabor when I am transfigured and friends with me at Gethsemane. I also have to think about what kind of friend I am. I have failed my friends, whether intentionally or not. There have been times where I have been sleepy and unavailable when I should’ve been awake. I’ve missed Gethsemanes and transfigurations because of sleepiness–lack of vigilance, lack of awareness, weaknesses in my character I am sure.

Life has a way of separating friends–with all its busyness and commitments. But friendship doesn’t just happen. We have to be intentional about friendship. We need each other.

And friends, those of you who read this blog, or just stumble upon it, my profoundest hope for this blog is that it’ll be a little bit like breakfast on the beach after a long hard night.

You know, I’ve asked God to show me how to live. And here I share what I’ve learned and am learning. Let’s together learn to follow Jesus closely.